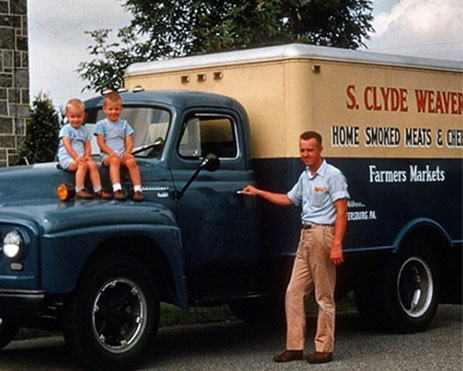 S. Clyde Weaver Inc. was founded in 1920 by S. Clyde and Emma Weaver. They started attending the Northern Market on North Queen Street in Lancaster City. Later markets in Lebanon, Rosemont, Upper Darby, Coatesville, and Sharon Hill were added to the venture. In 1961 a new building was built to serve the growing market business. At the new location, a retail store area was included to serve the East Petersburg area. A second store was opened in the Lancaster Shopping Center in 1993. 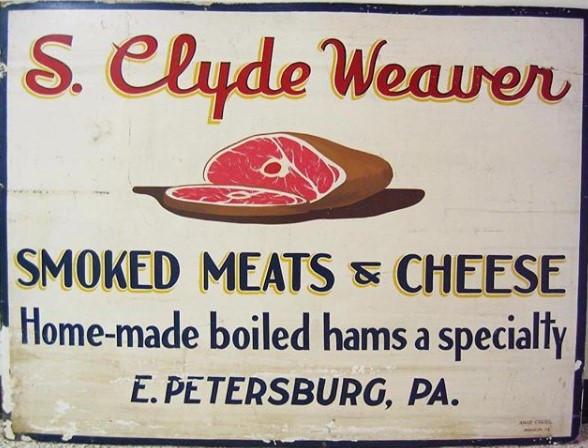 In the 1930s, when people walked to the city markets with market baskets, Clyde and Emma developed the first “boiled ham”, which was an innovation to the sandwich choices of the day. Before that, dried beef, Lebanon bologna, sweet bologna, and canned corned beef were the primary lunch meats available. The new boiled ham was made from whole smoked hams that were cooked overnight with sugar and spices to make a ready to eat sliced sandwich meat. In early years the hams were taken to market hot in the morning and carved by hand as customers filled their shopping baskets. In later years hams were chilled and cut into pieces for slicing at the market. S. Clyde had only one hand crank slicing machine at the time. He held it on the running board of his car as he transported it from one market to the other in Lancaster. (Cell phones were not the first distraction for drivers) 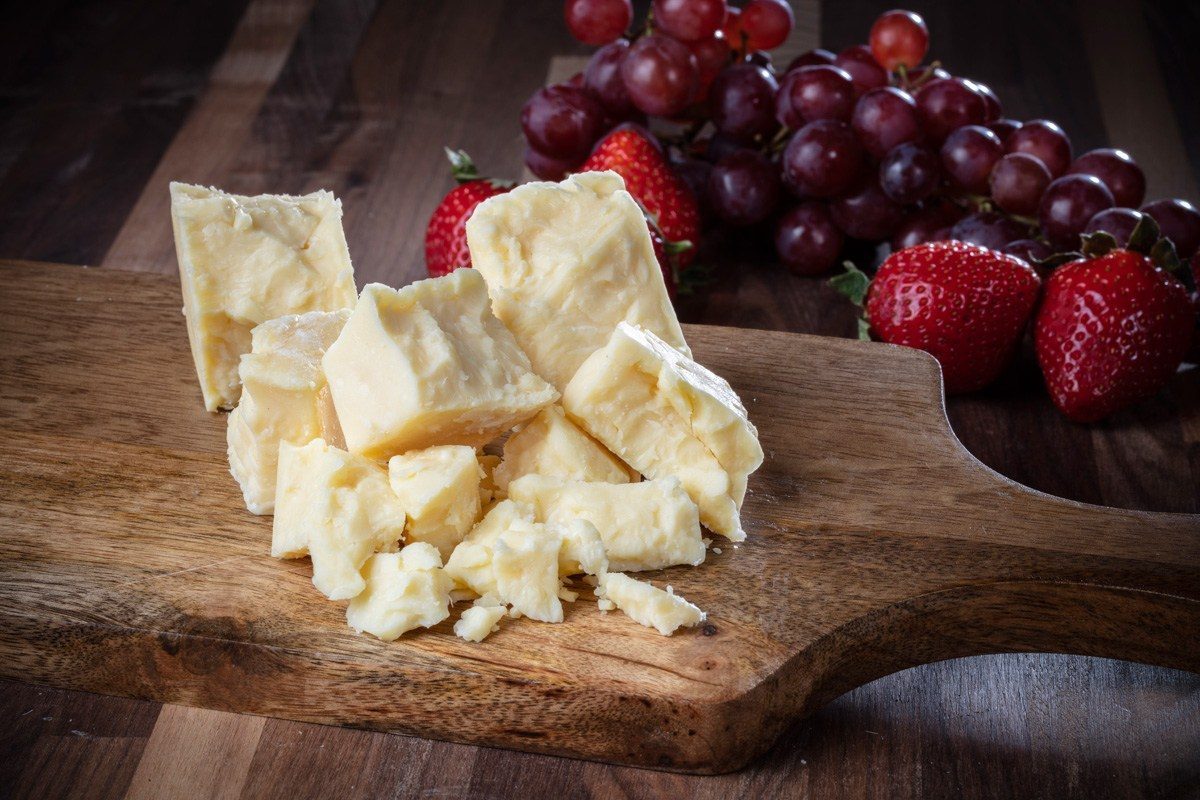 The Early Days of Cheese

Weavers became known for the best cheeses as well. In the early years, 80-pound Cheddars in round wooden boxes were delivered to the railroad station in East Petersburg. The cheddars traveled from Wisconsin and were then stowed in the basement of a workshop in the alley near the smokehouse. Large wooden barrels of dill pickles were also stored in that building. 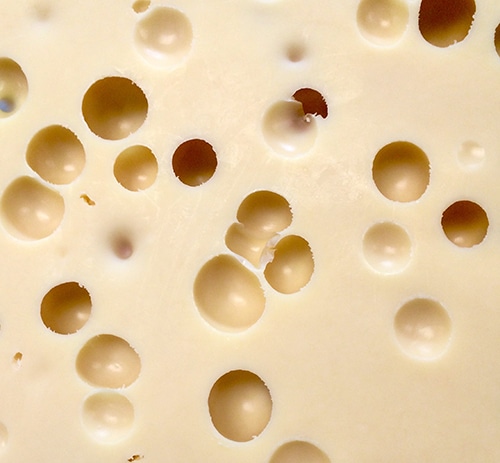 Swiss cheese from Ohio was also a major product in the early years. Before the days of plastic packaging, Swiss cheese was made in 200-pound wheels with a rind made by salt on the outside of the fresh cheese. The wheels were first soaked in salt brine, and then hand-rubbed with salt to dry and harden the rind. This hardened portion of the cheese became the “packaging” as the cheese was hauled without boxes on trucks with shelves for the mammoth wheels. 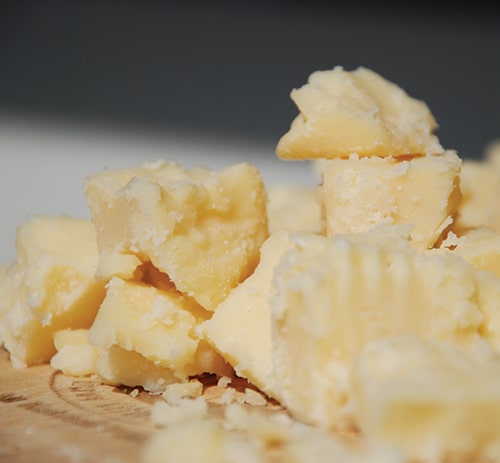 In the early 1990s Weavers started an aging program for Canadian Cheddars. The cheddar blocks are imported at 9 months of age to be slowly aged for premium flavor at 3 or more years of age. This product is sold at S Clyde Weaver retail locations as Super Sharp Cheddar when it reaches the age of 4 years. This premium white cheddar is also distributed to other retailers as Old Quebec Cheddar at 3 or 7 years of age. 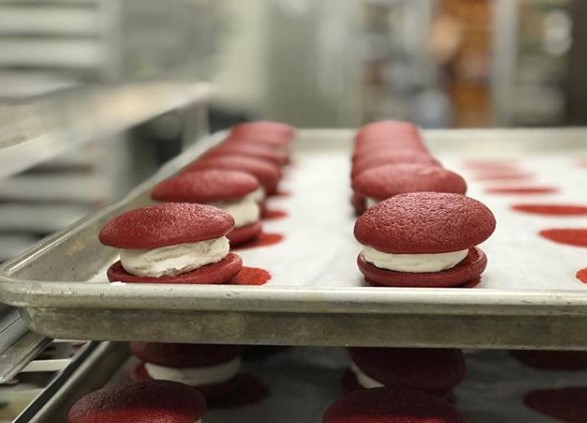 To Welcome and Serve

Over the years many products have been added to the line. Our own made shoo-fly pies, whoopie pies, and sand tart cookies make Weavers a destination for those wanting the best of Lancaster County. Hams, aged cheddar cheese, Swiss cheese, scrapple, bacon, and sweet bologna remain the staples of the line. 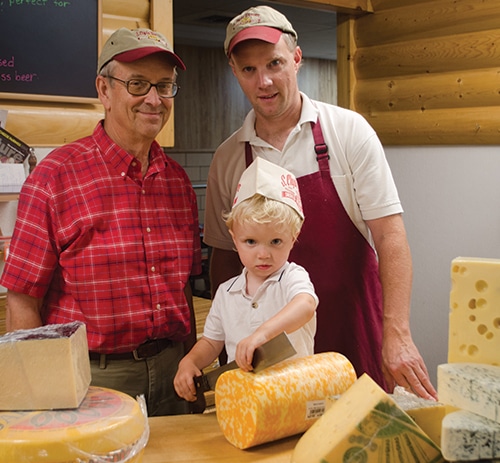 Weavers are family-owned by the third and fourth generation and are committed to bringing the best of Lancaster County and the region to your table. S.Clyde and Emma’s desire to serve continues as part of their legacy. We look forward to serving you.