How Is Jerky Made?

If you’re a meat-eater, chances are, you’ve probably enjoyed digging into beef jerky more than a few times. As deliciously savory as jerky can be, it may be surprising to realize it can also be one of the most nutritious snack choices. Lovers of jerky will surely enjoy learning more about this protein-packed snack, including where it comes from, what types of meat you can use to make it and the process of creating this treat. We’ll warn you, though — you’ll be craving some jerky before long!

Jerky is a dehydrated meat snack people have enjoyed for many centuries. The word derives from the Spanish word “charqui,” meaning “jerked meat,” which originally came from the Quechua “ch’arki,” meaning “dried flesh.” Ancient Incans in the Andes made ch’arki from llama and alpaca meat, starting possibly about 8,000 years ago.

You can find types of jerky in many cultures. Some archaeologists believe hunter-gatherers from other ancient communities were producing jerky as early as or even earlier than the South Americans. Drying is the world’s oldest and most prevalent method of preserving food.

Preserving meat provided a way to use an entire animal without letting anything spoil. In the past, people have used air drying, curing and smoking to produce and preserve jerky. Because jerky is shelf-stable, it has long been a valuable source of protein for people when obtaining and cooking fresh meat was difficult, such as during journeys.

Jerky remains a popular snack today and still delivers the same impressive level of protein and nutrients when you’re on a hike, at the office or at home and need a nutritious snack.

Making jerky requires removing so much moisture that a pound of meat or poultry will weigh about four ounces after it gets dehydrated. That’s why jerky can be more costly per pound — it is incredibly nutrient-dense. Just a couple of thin slices of jerky will deliver the same nutrients you would get from a plump cut of meat.

The popularity of low-carb diets has put jerky in the spotlight even more lately, since jerky is a healthy, filling snack that can replace carb-heavy treats like potato chips, granola or crackers. Jerky also tends to be quite lean, making it a good option for low-fat diets.

Keep in mind that jerky typically includes ingredients to enhance the flavor, so jerky can contain sugar and other additives. In its purest form, however, jerky is only salted meat. Today, jerky comes in nearly endless meat types, textures and flavors, so whatever kind of jerky you’re looking for, you can likely find it.

Is Jerky Cooked or Raw?

Jerky is a fully cooked product. It is never raw. Of course, merely cooking meat does not preserve it. Jerky can last so long without spoiling because it contains so little moisture. Modern methods of making jerky cook the meat while drying it out. You can do this with a smoker, oven or dehydrator.

Properly prepared jerky can last safely for a year. Curing or smoking preserves some jerky even further. These different methods will also contribute to the jerky’s flavor profile. While there are many types of jerky, all commercially sold jerky is a fully cooked product, is safe to store for extended periods and is ready to eat right out of the package.

What Can People Make Jerky From?

You’ll find all sorts of jerky types on the market today, ranging from the standard beef jerky to jerky made from reptiles and other exotic animals. Because its preparation process turns meat into jerky, there is no limit to the types of jerky people can make. One thing to pay attention to when making jerky is the fat content of meat. Fat won’t dehydrate effectively, so the presence of fat in jerky will decrease its shelf life. Therefore, lean meats work best for jerky production.

How to Make Jerky

Even if you understand what jerky is, you might not be familiar with how to make it. Though there are countless recipes for making jerky, we can break down the four fundamental steps for how to make beef jerky or other types, depending on your meat preference.

Since jerky consists of thin slices, jerky-making artisans must cut the meat carefully. Chilling the meat to almost frozen makes slicing easier. A meat slicer machine is the best way to achieve consistent results. All the slices should be of even thickness, so they cook at the same rate and reach the same level of doneness. Some jerky consists of ground meat formed into pieces, but this is not the traditional method for making jerky.

This slicing step also involves trimming off any fat on the meat before it moves on, since the oils in the fat will remain after dehydration and can cause jerky to spoil prematurely. That’s why it makes sense to choose cuts of meat that are already lean and do not contain marbling.

The second step is where much of the magic of jerky-making happens. Here is where artisans and food manufacturers use their unique recipes to produce jerky in their signature flavor or flavors. They can do this with a dry rub or with a marinade or brine.

Marinades and brines will add moisture to the meat, which will increase the time it takes to dry it out, but it can be an excellent way to permeate the meat with delicious flavor. For example, we use a delicious soy-based marinade for our signature Lancaster-style beef jerky.

Though every recipe is unique and contains varying combinations of ingredients like spices and sugars, jerky-makers typically include salt in their rubs, marinades and brines, since it is an outstanding natural preservative and flavor enhancer. You can make lower-sodium jerkies, however, using acidic marinades. Some jerky may also contain chemical preservatives like sodium nitrite. Some type of preservative, whether natural or artificial, is necessary to lengthen jerky’s shelf life.

When using a marinade, you can either allow meat to soak in a cold marinade in the refrigerator before cooking the meat while it dries out, or you can cook the meat in a boiling marinade, then dry it out.

3. Cooking and Drying the Meat

Once the meat is ready to dry out, jerky chefs place the strips on racks, evenly spacing them so they cook and dry out at the same rate.

The method for cooking and drying jerky varies from company to company or home chef to home chef. The secret is to ensure it quickly reaches the necessary temperature of 160 degrees Fahrenheit for meat and 165 degrees for poultry, and then continues to dehydrate at a lower temperature. Cooking and drying at a low temperature throughout the process can allow bacteria to survive.

Jerky makers can use smokers, ovens or dehydrators to cook and dry out jerky. Using a smoker will add that unmistakable smoky taste to the jerky, which works well for some jerky flavors. It’s also possible to use large industrial ovens set at a low temperature with fans and exhausts that remove moisture from the air. Home cooks may use countertop food dehydrators to create small batches of jerky.

Whatever method used for cooking the jerky, it is adequately dry when it reaches a moisture-protein ratio of 0.75-to-1 and a water activity of less than 0.85. The time it takes to get to this point will depend on the temperature you’ve kept it at and the thickness of the meat.

Now, the jerky can cool off and move onto packaging. Sealed plastic bags are the typical packaging of choice for jerky. Sometimes, manufacturers and even home cooks use vacuum-sealed bags, which can help preserve freshness. For bags that are not vacuum-sealed, you’ll likely find an oxygen-absorbing packet inside. As with vacuum sealing, this helps eliminate oxygen that could cause jerky to spoil sooner than it otherwise would.

Packaging is also where brands get to include their signature logos and designs and nutritional information about their jerky. Especially for non-beef jerky, you’re likely to see a picture of the animal on the front.

You can learn a lot about the jerky by checking the nutrition label, especially the ingredients list. However, you may not see an exact recipe for the company’s marinade or seasonings, since food labels often use a blanket term like “natural flavors” to group these ingredients.

At S. Clyde Weaver, we use time-honored methods and high-quality ingredients to produce a range of delicious products, from smoked meats to aged cheeses to scrumptious jams and jellies. In addition to gracing America’s tables with foods for every meal, we also make delicious snacks, including mouthwatering beef jerky in several flavors and our exceptionally soft and delicious turkey texture.

It’s hard to beat beef jerky when you’re looking for a tasty, nutritious snack. Order some of our artisanal jerky today to enjoy on your next hike, road trip or whenever you’re ready for a boost of protein and amazing flavor. 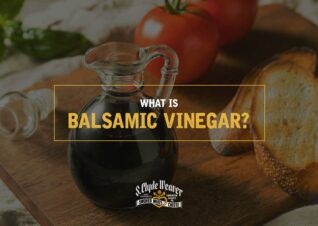 What is Balsamic Vinegar? 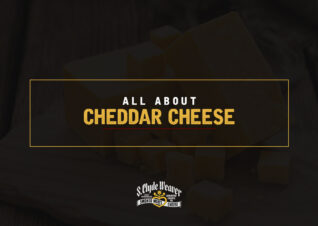 All About Cheddar Cheese 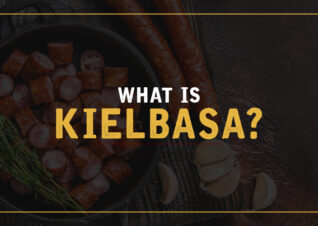