The Different Cuts of Beef 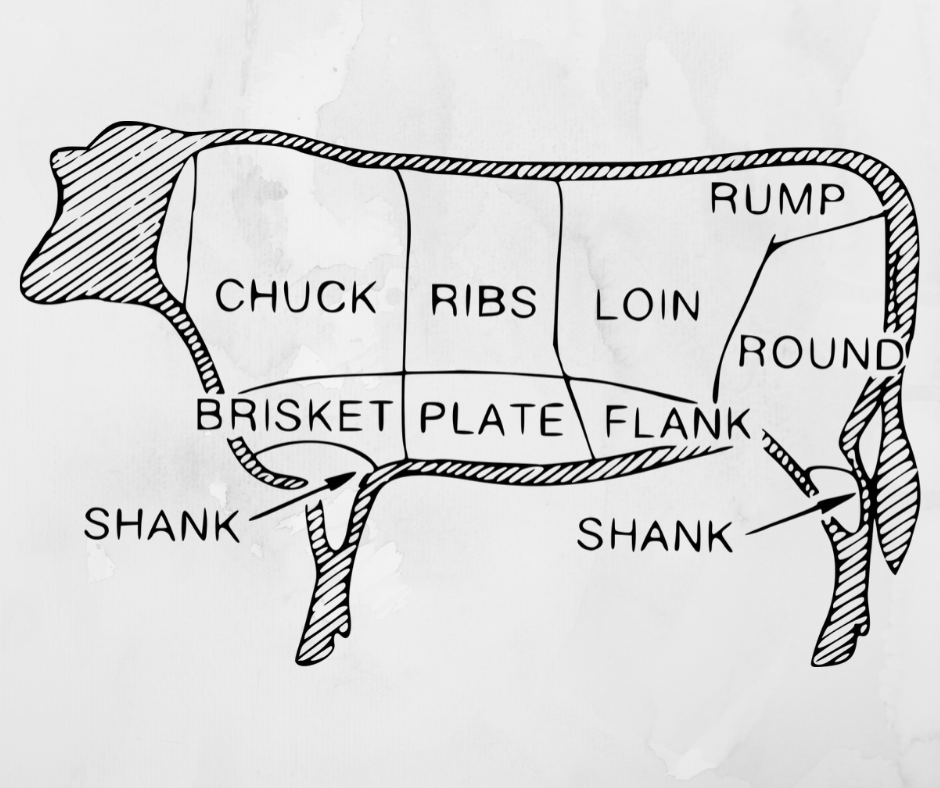 Beef is one of the most popular meats on American dinner tables. Did you know that, on average, Americans each consume over 67 pounds of beef? That’s over one pound of beef every week. As much as most of us enjoy this meat, you may not know what separates one type from another. Butchers separate each part of a steer to create different cuts of beef. While all of these cuts are beef from the same cow, they can differ dramatically.

The muscle usage, marbling, bones and other factors all contribute to a unique flavor and texture profile for each cut of beef. So, how do you keep it all straight when you’re looking to buy something delicious to enjoy for dinner? We’ve created a cuts of beef guide that will provide you with an easy overview of each primal and subprimal cut of beef. We’ll also talk about the best ways to prepare these cuts so you can enjoy naturally tasty beef.

What are the 8 Primal Cuts of Beef?

Let’s start by looking at the primal cuts of beef. These are the eight basic cuts that separate one whole side of beef. These cuts incorporate large sections that get cut down further to form subprimal cuts and individual portion cuts of meat you might buy at the butcher shop or grocery store. These eight different cuts of meat include the following.

What are the Subprimal Cuts of Beef?

If you’ve purchased beef from a butcher or supermarket, you know beef comes in far more than just eight different cuts. That’s because butchers can further divide each primal cut of beef into smaller sections known as subprimal cuts. You can often find subprimal cuts cut down even further into individual cuts at the grocery store.

Now that we’ve looked at the eight primal cuts of beef, let’s turn our attention to the subprimal cuts that belong to each primal cut and how to prepare these cuts to bring out their best textures and flavors.

Because it includes a lot of connective tissue, the chuck primal cut is relatively tough. Chuck is also high in fat content, which contributes to a rich flavor. Chuck often gets turned into ground beef, and it is also a great cut for stews and roasts, since you can slow-cook them to make them tenderer. Let’s take a closer look at the subprimal cuts of beef chuck.

All-time favorite beef cuts like the ribeye steak and prime rib roast come from the rib cut. There are only two subprimal cuts, but both of these subprimal sections include many popular cuts of beef. Because the beef rib section is tender and flavorful, these cuts are versatile, and you can cook them to perfection in many different ways. 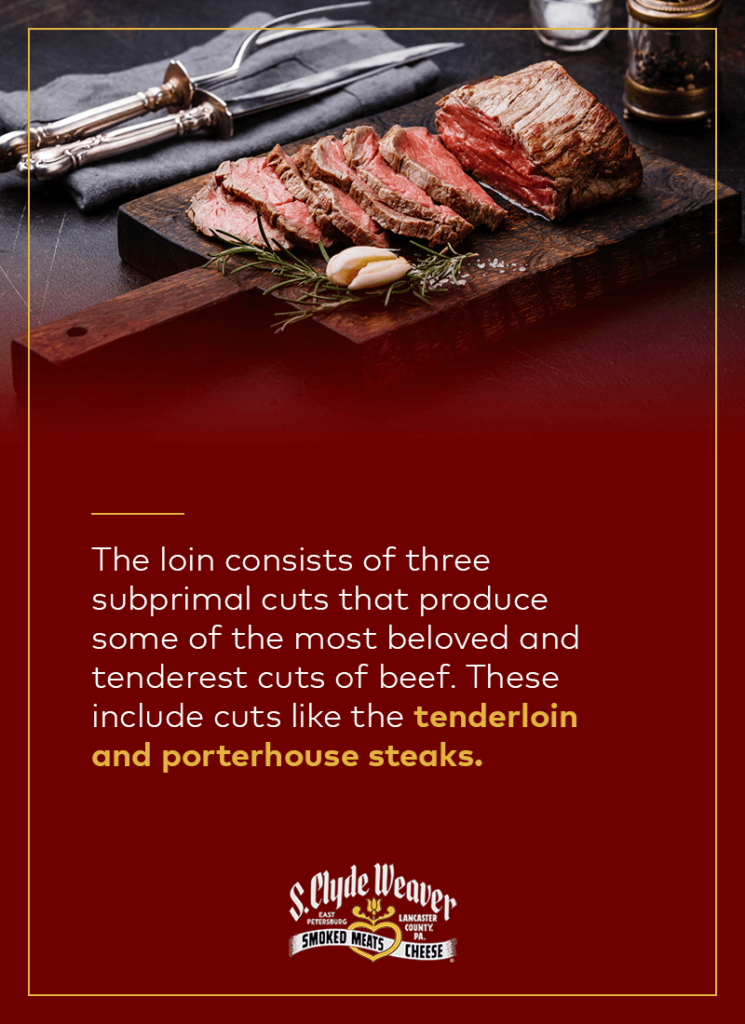 The loin consists of three subprimal cuts that produce some of the most beloved and tenderest cuts of beef. These include cuts like the tenderloin and porterhouse steaks. Many loin cuts are lean, but they are still tender because of their location on the steer.

You should bake or roast butts and roasts, and brown tips in a skillet. You can prepare the other loin cuts in a variety of ways according to your preference. Grilling and pan-searing are popular methods for bringing out the delicious flavors in steaks that come from loin subprimal cuts.

The round primal cut is relatively inexpensive and can be a bit tough. Most cuts from the beef round section are lean and have a lower fat content. Still, this primal cut produces some subprimal cuts that are useful and delicious for all sorts of dishes. They may require some marinating or slow-cooking to become tender. Marinating is the method of choice in most cases for steak, and slow-cooking is the best way to tenderize roasts.

The beef flank primal cut produces just one subprimal cut: flank steak. Also called London broil, jiffy steak or plank steak, flank steak is lean and flavorful. Flank steak is a good choice for ground beef. You can also broil a flank steak, slice it up and stir-fry it or can marinate and grill it and then slice it.

When grilling flank steak, the key is to cook the steak at a high temperature over a short period. Be careful not to overcook the flank steak so that it remains moist rather than drying out. Once you’ve cooked the steak, cut it into thin slices, going against the grain.

The plate primal offers five subprimal cuts. Unlike many of the beef cuts we’ve looked at, which are best to prepare through slow-cooking methods, many plate subprimal cuts are well-suited to fast cooking over high heat.

Beef brisket is flavorful, but it can be a bit tough, since it comes from a muscle that cows often use in their daily life. Slow-cooking is, therefore, a smart method of cooking brisket, so it becomes tender as it cooks. Brisket is divided into two subprimal cuts: flat half and point half.

Last on our list of beef cuts is the shank. The shank primal is a section of the leg, so the cow uses these muscles quite a lot. For this reason, shank meat can be tough by default, but cooking it low and slow can cause it to become very tender.

There is only one subprimal cut of the shank primal to be aware of: shank cross-cut. This lean cut is best known for the Italian dish osso buco, where it is the star of the show. Braising it leads to fork-tender meat.

At S. Clyde Weaver, we understand meat. That’s because, for over 100 years, we’ve been smoking, aging and otherwise preparing delicious meats and cheeses that bring the culinary heritage of Lancaster County to your table. Even though we don’t carry fresh beef online or in-store, we do create delicious beef delicacies like gourmet jerky and snack sticks or thin-sliced smoked dried beef, made from top-quality beef knuckles. Browse through our online store to see what S. Clyde Weaver products you want to try at your next picnic, family dinner or holiday gathering.

3 responses to “The Different Cuts of Beef” 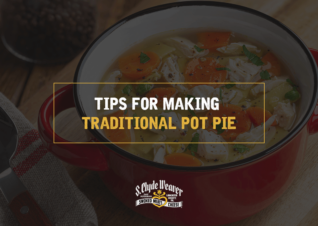 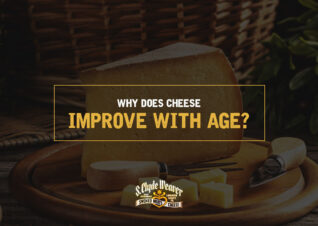 Why Does Cheese Improve with Age?